“Some people never find it. Some only pretend. But I just want to live happily ever after, now and then.” – Jimmy Buffett

The plan was to stop on Koh Tao (a very small island in the Gulf of Thailand) for a week or two. We were going to try scuba diving, enjoy the beach, then get back on the road heading North for Chiang Mai. That did not happen.

Instead, our week or two is now at about six and we don’t have any plans for leaving any time soon. When we started the trip we always talked about scouting out places we really liked for when we wanted to take a break from traveling for a few months. We didn’t think we would end up staying on an island and training for new careers… sort of.

The first two weeks here were great. The weather was beautiful and the beach was fantastic. We swam and enjoyed all the Western and Thai food on the island. I got my open water scuba certification and we were just hanging out with no cares. We stayed up late, woke up whenever we wanted and generally relaxed. Lauren got food poisoning which was not fun at all, and the weather turned bad for about 5 days due to the remnants of a typhoon, but we were really enjoying it here. Our Visas were going to expire and we debated on what to do. 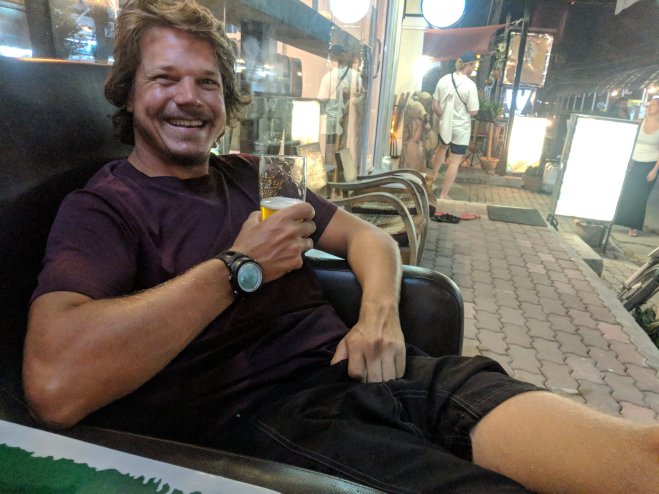 We considered a standard boat/van visa run to leave the country then come right back or maybe taking a boat to the mainland and riding the bikes to Burma and back. We thought about riding to Burma then just continuing up the Eastern coast. Finally we thought about just heading up to Cambodia. We debated for days and ultimately decided to just do a visa run and stay on the island.

We had an interesting mini-adventure for the visa run. We took the night ferry from Koh Tao to Chumpon and slept in bunks on the boat.

We arrived bright and early on a seemingly abandoned port at 5:30 AM and looked around confused. We waited with the other westerners and eventually a guy in a van showed up and started coralling us around. We ended up in a van, then switched to another van, then finally got on the road. What a road it was! The drive took us up and over the mountains toward Ranong. It was the same highway we had so desparately avoided on the bikes on the way down. Being in a car in and of itself was novel and the driver was downright insane. The road was a series of windy blind curves for miles. We spent at least 30% of the time on the wrong side of the road. Basically, there are lines painted on the road in Thailand, but they are purely for decoration. The other side of the road and both shoulders are all fair game. Passing on a blind curve just requires a simple toot of the horn and off you go.

It was about a two or three hour trip before we arrived at Ranong. We were shuffled to a place that copied our passports then stood in line to get exit stamps. We jumped on a boat that could only be boarded with crisp new ten dollar bills from the US for some reason.

The boat was a traditional longtail and we thought we had made it to Burma after a short trip. It turned out, this was the immigration checkpoint #1 of 3. The next thing we knew they were handing us life jackets as we laughed until we realized why. We had to cross a big gap of no-shit ocean to get to Burma. The boat was maybe 25 feet long and the waves were not small. We were splashed and rocked around for 40 minutes as we crossed the sea to Burma. “You may know it as Myanmar, but it will always be Burma to me.”

We spent a grand total of 20 minutes getting our passports stamped, then immediately left to come back to Thailand. The return journey was just as fun and re-entering was pretty easy. One gal in our group had a bit of trouble, she had done this several times before and the immigration officials basically told her she couldn’t come back into Thailand. Our guide stepped up and had some words with them and somehow it was magically resolved in ten minutes. +1 for booking through an agency and not trying to do it yourself. On the ride back, we got to know Cecilia from Argentina and had wonderful conversation about the island, diving, travelling and life in general. After the van ride for some reason we stopped to swap vehicles again and another gal in our group became beligerant. “If she missed the ferry, she was going to flip her shit!” she informed everyone over and over. We, along with Cecilia thought it was amusing and were glad that “shit flipper” ended up in a different van for the remainder of the trip. During the last leg which was a high speed chase to catch the ferry that involved dropping off a random Thai lady at a restaurant we chatted about how nice it feels to leave emotions like that behind. I proclaimed that if we missed the ferry the first round was on me and I knew a great seafood place at the pier. We laughed and decided we didn’t really care if we made it or not. 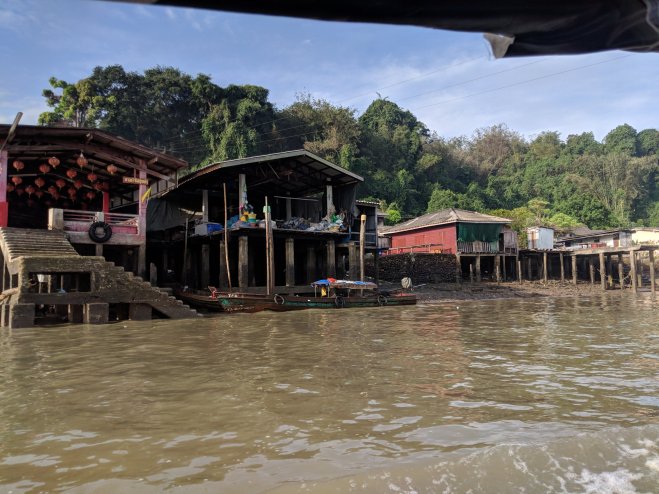 As luck would have it we showed up a few minutes late and they hadn’t even started boarding. That didn’t stop old shit flipper from cutting the line and ensuring she was among the first to be on the ferry so she could wait 30 minutes for everyone else to board. The whole thing was a great lesson in how far attitude can get you in life. Here is one person who is worried so much about something she has absolutely no control over. Additionally, the worst case scenario was that we miss a boat and take the next one. She was worried sick, embarassing herselft as she acted like an asshole. She was verbally abusive to the driver who was just doing his job and stressing out about missing a fricken boat! So much for the island attitude! On the other hand, Cecilia, Lauren, and I, took the oportunity to make new friends. We shared stories about how we might have reacted similarly in our previous lives, but have since learned that most of the time, it’s not worth it to get upset. The whole experience was a great reinforcement of all the decisions we made that brought us to that point.

When we got back we tried a new scuba shop called Goodtime Adventures, they also do rock climbing and flying trapeeze. The vibe at this place was exactly what we were looking for: stress free, laid back and focused on fun. I decided to keep pushing further with scuba and started my training to become a professional divemaster. I’d always thought scuba diving would be a great second career (if you can call it that) and Koh Tao is known for being one of the most beautiful (and cheapest) scuba destinations in the world. Lauren gave scuba a few more tries and decided it really wasn’t her thing so she started a climbing course to become a rockmaster. Like me with scuba, it is something she has always wanted to learn. She has fallen in love with climbing and comes back every day covered in bruises, calluses and smiles. 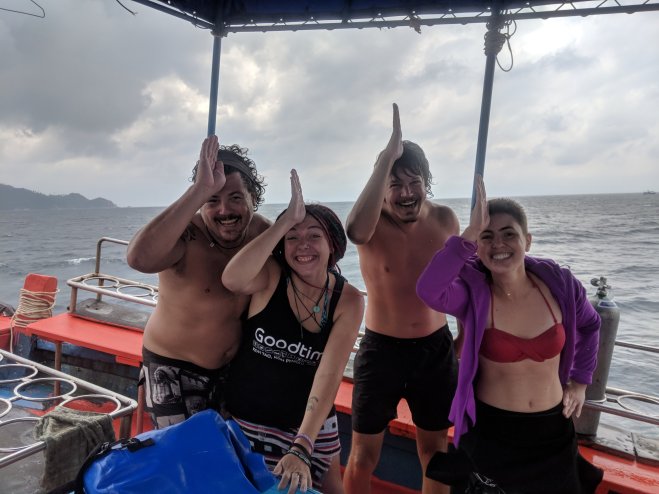 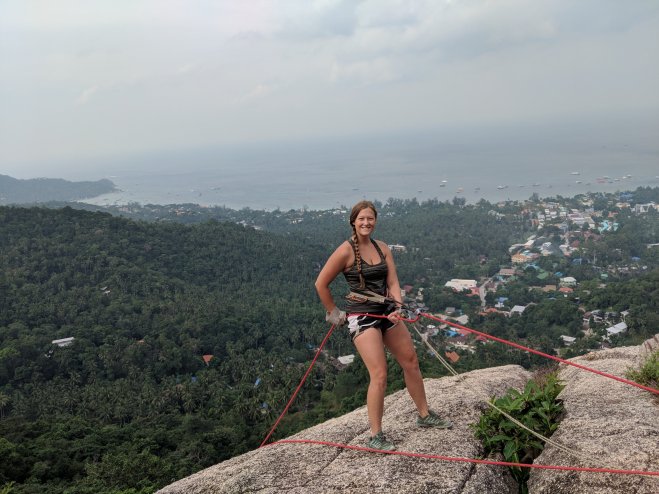 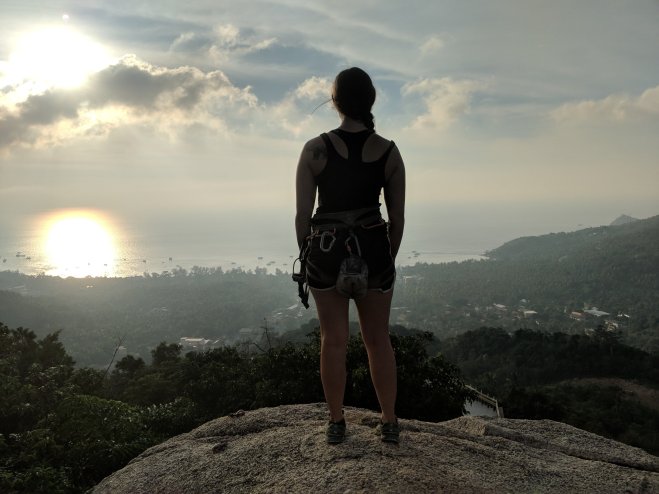 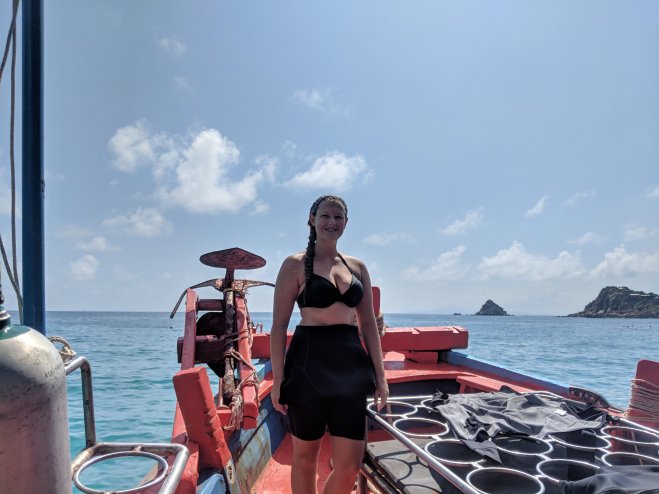 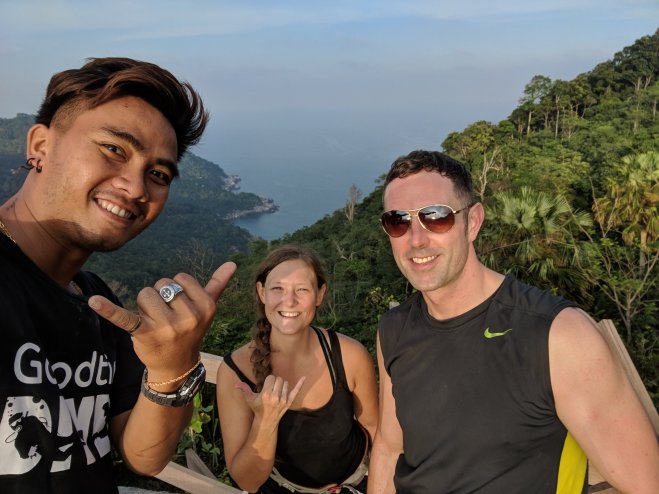 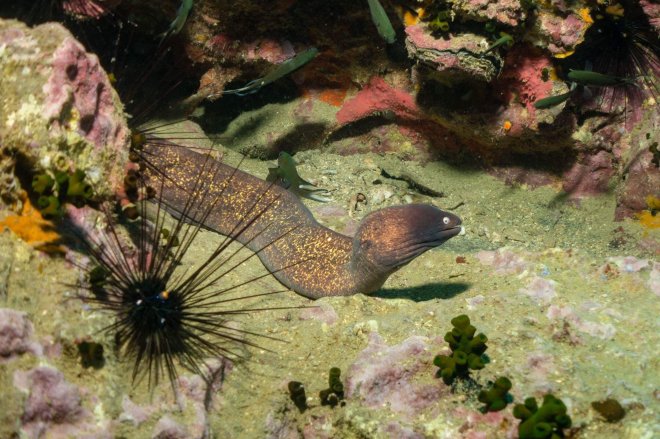 We’ve made such great new friends on the island, and it’s starting to feel like home. It feels good to have a purpose for awhile. We are absolutely going to get on the road again at some point, but for now we are living cheap and doing what we love on a tropical island… Why would we leave?

The last few weeks have been interesting. We’ve settled into a bit of a routine and our training kinda feels like work… But in a good way. Lauren is already guiding beginner climbers and I’m close to finishing up my divemaster training. She’s seen some amazing views from atop the island and I’ve dove with whale sharks twice! The bonus is once we complete our training we might even be able to make some extra money doing something we and a lot of other people are paying to do for fun.

I’ve fallen in love with the underwater world in the same way I love flying. The silence and serenity are unexplainable unless you’ve done it. I’ve blown a fair amount of money on scuba gear and training, but somehow justified it by the fact that I will be able to work anywhere in the tropics forever if I so choose. The long hair, no shirt and wearing flip flops to work style is fitting me a little better than a buzzcut and a prompt military schedule. The best part is that Lauren is climbing out of the same shop I’m diving at. We share lunch most days and go out to dinner every evening. It’s been busy, but once we finish the training we plan on settling into a part time work schedule and slowing down again. 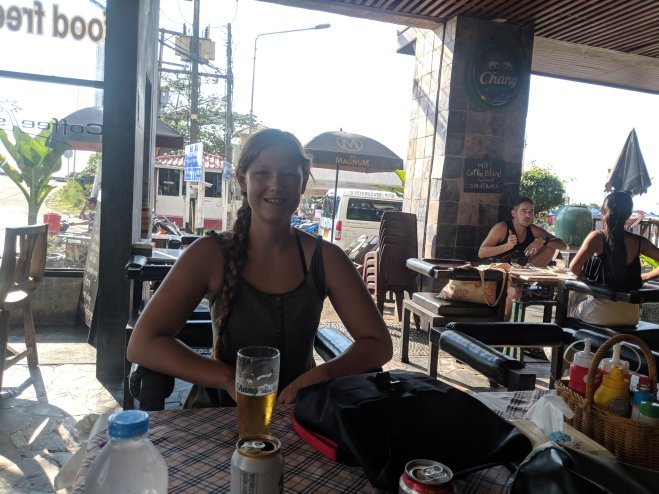 I think we’re “supposed” to be on a bicycle trip, but I guess this chapter is a little more spontaneous and a little less spinning. In the meantime, we’ve got the two most expensive clothes hangers in all of Asia!

*Whale shark videos courtesy of some girl with a go pro who was on the same boat as me.